Inspiration to writing this article has been excerpted from the lecture “Like a Panda: Flow with Bamboo” led by Jonathan Doklovic, one of Atlassian's employee, during Atlassian Summit 2013.

That lecture described potential of building and deploying feature branches. Such functionality is offered by Bamboo – software released by Atlassian itself.

Atlassian Summit 2013: Like a Panda: Flow with Bamboo
Owing to the fact that the team was approaching a new project, which by definition should have a didactic element, it was decided to prepare similar solution using other, free CI tool. The choice was Jenkins, widely known and used in IT projects.

A short list of features, which should be supported by new solution, had been prepared before the project started.

How does it work? 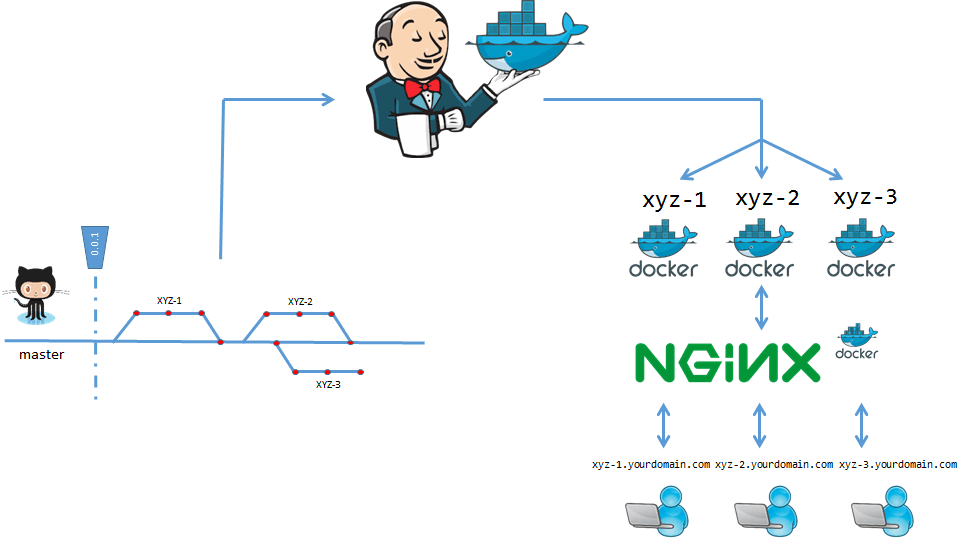 Solution assumes that two kind of branches exist in repository:

It is not required to work with full featured git-flow. Nothing prevents use of some other branching concepts. The only requirement is to have the branches mentioned above. Other branches, from solution perspective, don’t matter. Jobs in Jenkins are related only to master and feature branches.

Feature branches are typical ones, however logically they play a different role. Some mechanism is needed to distinguish them from other branches. In order to do that, some naming convention is required. For such project like XYZ, feature branches can be named in that way:

Regular expression which is needed to distinguish branches from feature branches is required to be introduced in Jenkins job. 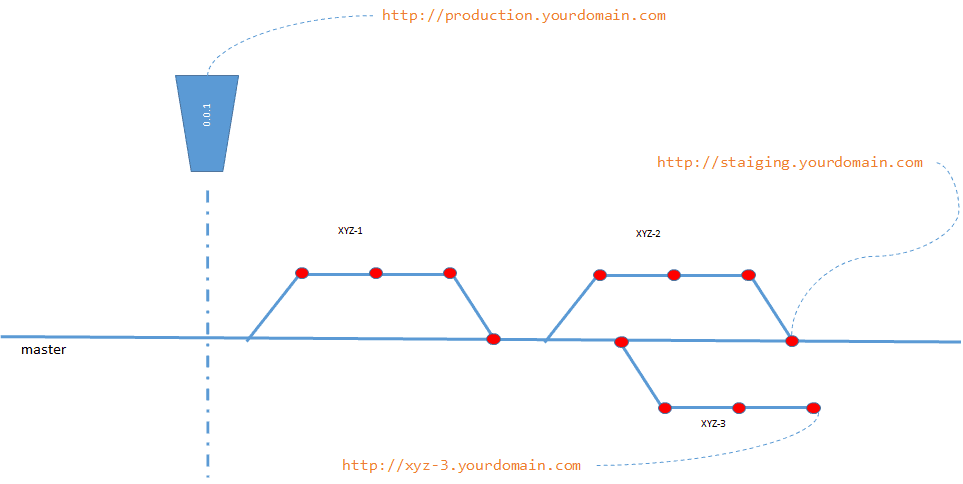 The illustration above depicts a sample structure of branches in a fake project XYZ. For such structure the following URLs are available:

Domain „yourdomain.com” is not configurable. It depends on external settings.

When configuring Jenkins, few plugins have been applied in order to achieve desired shape:

Docker image has been used in order to setup Jenkins and one slave node.

Jenkins, configured for this solution, contains 4 jobs. Their description with sketch is presented below. Important elements are marked with red border. 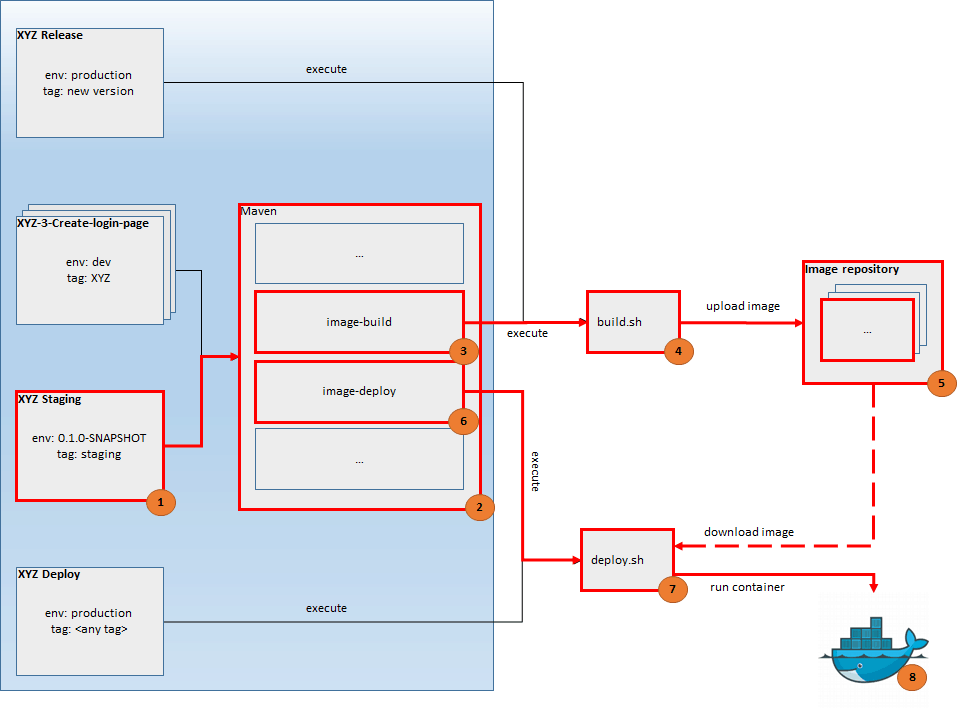 XYZ is a template job formed by Multi-Branch Project Plugin which allows to:

Multibranch job specifies time interval when and which job template instances synchronize with corresponding branches. In the example shown below, branches synchronize every 2 minutes. Only these branches, which names do not match against “tasks/*” and “master” patterns, are tracked. Each time, when changes are introduced to these branches, Jenkins detects changes and performs appropriate action.

When Jenkins launches job related to specific branch, the script shown below is executed at first. From branch name, which is given in GIT_BRANCH variable, only some part is extracted (as described in “Git” section). Output string is stored in a file “featured.properties” as variable FEATURE, which is injected in the subsequent step. 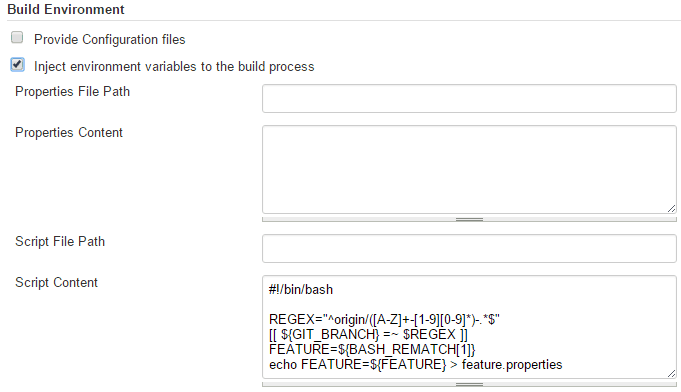 At the end, Maven command is invoked. Two profiles are specified to be launched. Moreover, two parameters are passed.

An image-build profile launches script which is responsible for creating Docker image. Image is formed based on Dockerfile, which is presented below. JAR file with compiled application is copied to appropriate directory and port 8080 is exposed. When Docker launches a container an application automatically starts.

This Dockerfile is used by script build.sh, which is executed by an image-build profile.

Firstly, some parameters received from Jenkins are gathered in one place. Then, an image is built and pushed to the local image repository. In order to keep everything clean, the image is removed from machine where it was created.

When an image is pushed to repository, image-deploy profile is launched. Main goal is to execute script deploy.sh.

At the beginning, a script gathers parameters received from Jenkins. For feature branches, an image tag is equal to variable calculated by script launched in Jenkins e.g. “XYZ-100”. Docker container inherits this name in order to simplify identification which container belongs to which user story. In the next step VIRTUAL_HOST environment variable is created. More details about that variable can be found in the “Nginx” section. At the end, Docker removes existing container (if one is currently running), pulls an image from image repository and lunches container. 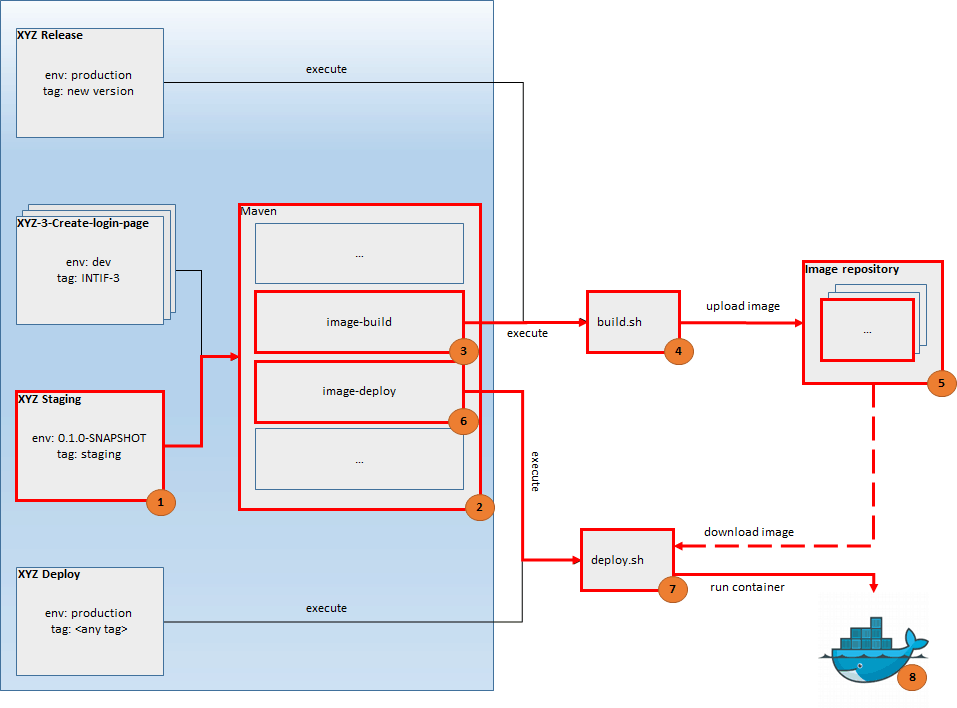 XYZ Staging is quite similar to the template job described above. It is not a template and it is much simpler. Job is launched automatically, just after Jenkins detects changes in the master branch. The Maven command is executed within that job.

Similarly, “image-build” and “image-deploy” are invoked during the Maven process. 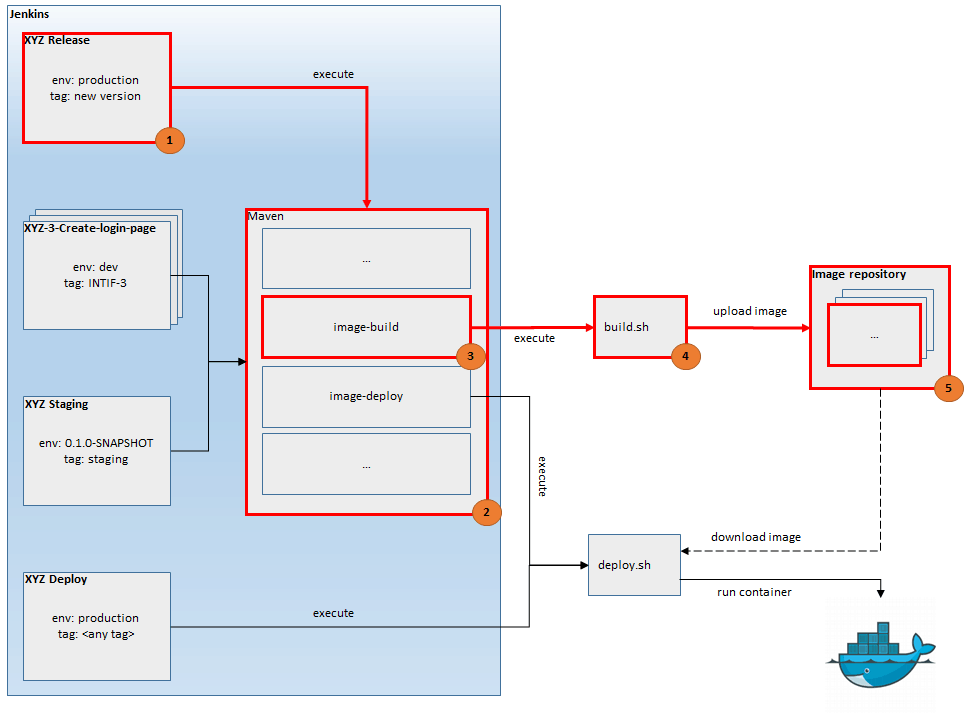 Job is parametrized, so a developer has to specify stable and next snapshot version. A number of stable versions is also used as image tag. Only “image-build” profile is launched within XYZ Release. 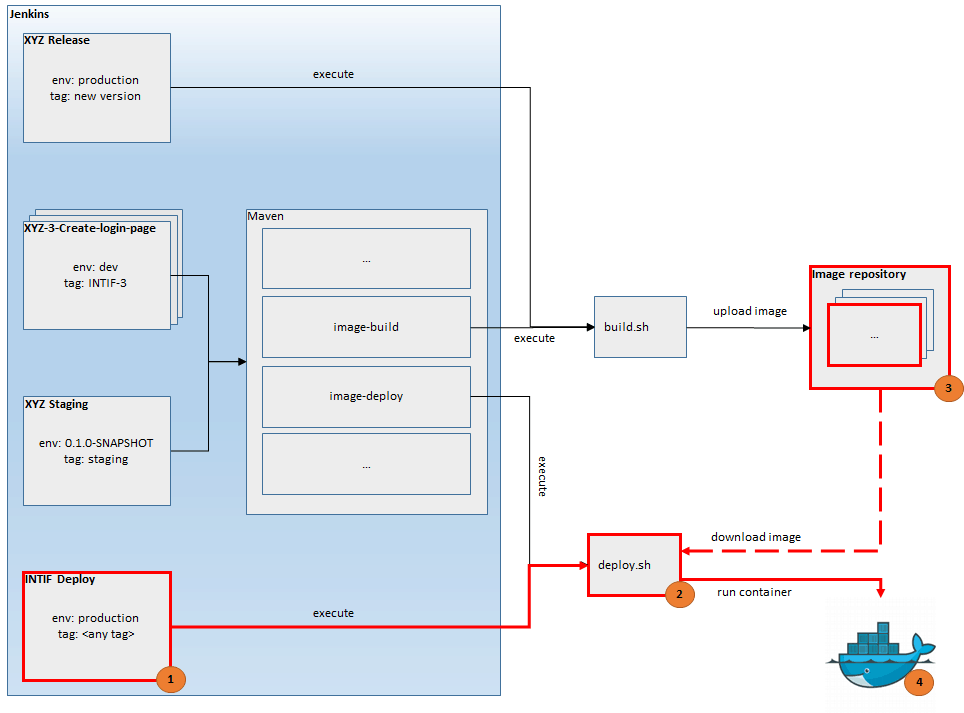 XYZ Deploy is simple job used to deploy any created image to production environment. Usually, the newest image should be deployed. Job is parametrized, so a developer has to specify image tag to deploy.

The script listed below is executed

In the presented solution several goals are developed:

Q: What exactly does it mean “easily and quickly available to the QA Team”?
A: Access to application will be via link that should be easy to remember and uniquely identify a User Story.

Q: What exactly does it mean “easy to remember URL”?
A: URL will be descriptive for the QA Team and should be generated automatically according to predictable convention.

Q: What exactly does it mean “URL will be descriptive”?
A: The most descriptive for QA Team are user story JIRA’s code name e.g. XYZ-9

All answers for these questions can be found in the post written by Jason Wider: Automated Nginx Reverse Proxy for Docker. That solution seems to match mentioned assumptions. In this post Jason described how Nginx can be used as Reverse Proxy and how it is possible to use virtual host for routing between docker containers. In our case special docker image named nginx-proxy based on Nginx has been prepared. Image groups Docker containers with application by environment variable VIRTUAL_HOST. After such Nginx a container is launched, all containers with that variable are able to be accessed via appropriate subdomain. More information can be found in the post mentioned above. All steps which are needed for implementation are listed below:

In presented approach one thing is very important. The containers that are proxied must expose the port to be proxied, either by using the EXPOSE directive in their Dockerfile or by using the –expose flag. In presented solution variable EXPOSE is configured in dockerfile:

After these steps an application should be available on the address which was passed by VIRTUAL_HOST parameter. Sketch of that approach is presented below: 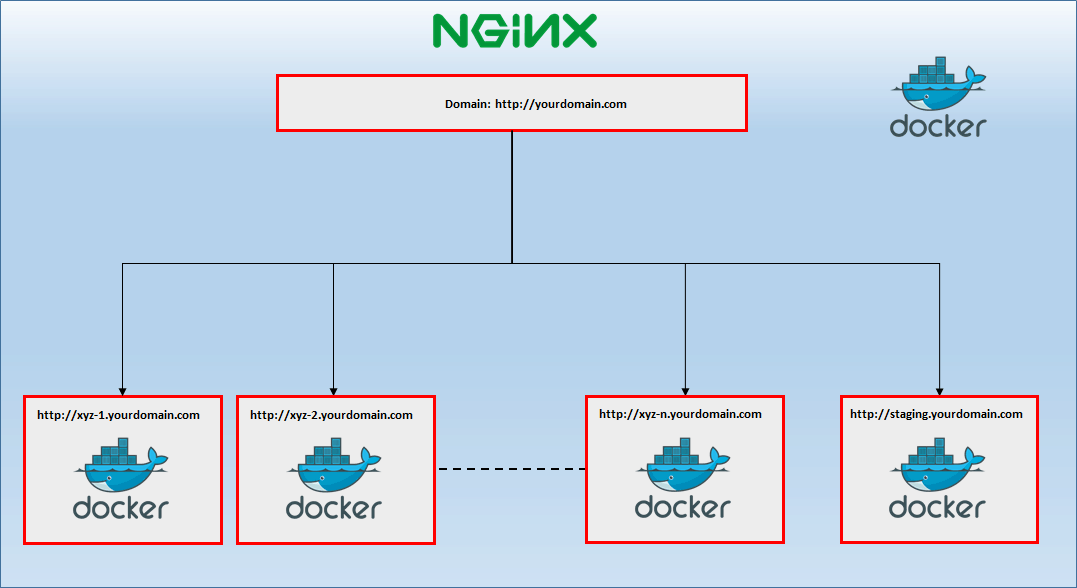 Created solution performed well in the conducted project. However, there are some things that could be created and some, which require further improvements. All these things have been listed below:

My motivation for writing this article is to show that even a small new feature can ...