Memcached is a highly efficient, multi-platform system for buffering the data in cache, developed by Brad Fizpatrick in 2003, for the purpose of LiveJournal service. It is mainly used to reduce the time to read from external data sources such as databases, files, and web services.

It uses client-server model, allowing running the instances of the server and the client on the same machine. We can also create the architecture of several Memcached servers and clients, in this case, however, the client must know all the servers. The programmer is also responsible for the implementation of sharding the data between them because the servers do not communicate with each other.

Particular attention should be paid to security issues connected with Memcached server – anyone can connect to it on 11211 TCP port, by doing the read and write operation. Therefore, it is a common practice to place the Memcached servers outside public access – usually in a separate private network.

First of all, Memcached is not suitable as a place to permanently store information. All data is stored in RAM, and when the entire buffer is filled, according to the LRU (Least Recently Used) algorithm, the least recently used items are removed. Therefore, we cannot be certain that previously saved data will be in the buffer at the time of the next reading. It is worth adding that there is a MemcacheDB project, based on Memcached assumptions, except that it permanently stores saved information.

Memcached has an API that is ready-made for the most popular programming languages, and its popularity is mainly related to the optimisation of web applications. It is often used as:

We can choose one of three installation methods available:

After a successful installation, a Memcached Server service starts automatically – we can check it using the command:

If we get a result similar to the following example, it indicates that the server is working properly:

To be sure, it is recommended to also check the connection with Memcached. For this purpose, we’ll show the server statistics, using the application:

The result that we should obtain:

Of course, Memcached protocol is more comprehensive and its complete specification can be found in the documentation available on the website https://github.com/memcached/memcached/blob/master/doc/protocol.txt.

All configuration associated with the Memcached server, in case of a Linux-associated system, is stored in the „/etc/memcached.conf” file. The most important options are:

A sample configuration file can look in the following way:

After the introduced changes it is required to restart the running services:

The work of the Memcached server may be the subject to monitoring, which is why few ready-made solutions were established, that differ between each other in functionality and technology, in which it was implemented. One-file PHP script – memcache.php, is a very simple solution that at the same time provides the basic information. It is worth adding that the majority of software specialising in monitoring servers like Nagios and Munin has its own extension associated with Memcached.

Memcache.php configuration is limited to the modification of the following values, placed directly in the source code:

Full list of available software can be found at: http://code.google.com/p/memcached/wiki/MonitorLinks.

The use of Memcached in PHP

PHP has two built-in, object-oriented API that allow the access to the Memcached server:

They are available as an additional extension for PHP from PECL repository.

Memcached allows the storage of any type of variable, available in PHP (array, int, string, object, etc.), except for the typuresources variables. In case of arrays and objects, they will be stored in the serialised form. If the object has magical methods __sleep(), __wakeup(), they will be called at the appropriate moments.

Remember that the __sleep() method must return a board of object properties that will be stored in Memcached.

Installing the Memcached extension for PHP

The easiest way to install the Memcached API for PHP is via PECL:

After successful installation, make sure that the module is correctly turned on:

The final step is to restart Apache server services:

From that moment on phpinfo() will display an additional section related to the configuration of Memcached. 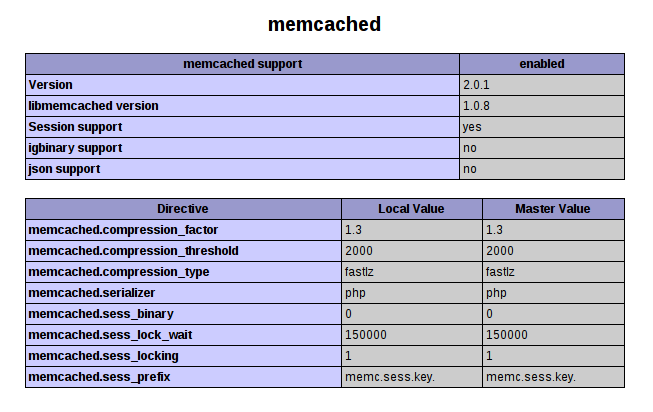 Saving the data in a Memcached session

By default, the information about the session is stored on the server as files, which causes an additional burden for the disc, because at every request incoming from the user, the data must be reloaded. Of course, the implementation of Memcached as a place for storing the session data will not be noticeable when the page is visited by only few users at a time. This makes sense only with increased traffic – then the advantage of implementing Memcached over the default way to save the session becomes greater.

The problem also occurs when you have more than one server running a copy of our application. In the standard case, each of them separately stores the session data. Implementing the Memcached can eliminate this problem by creating a focal point for the storage of such information.

In case of PHP it is enough to change two configuration directives, so that the session data are stored on the Memcached server:

Let us note that __ sleep() method returns only the name of class properties without available. When saving a Person class object in Memcached, only values for the properties firstname, surname and age will be stored.

The next step is to create a Person class object and Memcached and then to define the IP address and port of a Memcached server.

We save the Person class object and at that time the __ sleep() method of this object is being run.

Taking the value from Memcached is done by using the get() method. At the time it is being called, the __wakeup() method for Person class object will be run.

The result of the whole script should look as follows:

As we can see, the available value was lost. Thanks to the memcache.php tool, we can also view the data that has been stored in Memcached. The above-described object will be saved in the form of:

Memcached is a tool of powerful capabilities. In complex, heavily loaded web applications, we were able to accelerate the generation of subpages for about few or even tens of percent. By using multiple Memcached servers, our buffer size may greatly exceed the amount of RAM, available on a single machine. Another advantage is the ease of Memcached server configuration, the documentation provided by the authors and easy-to-use API for many different programming languages.

Static code analysis is not very popular in PHP world, because PHP is a dynamically and ...