Internet of Things – connecting everything!

Internet of Things happens to be a buzz-word that is often overused by marketing guys to boost profits by branding their product with labels such as 'smart' or 'intelligent', but what it really is. Why is IoT so popular? Let's take a look at the technical aspects of that phenomenon.

Simply put IoT covers autonomous devices that are connected with each other over a network. It means that not only computers can be a part of IoT, but also all sorts of sensors and embedded devices, such as Arduino or Raspberry Pi. A 'thing’ in IoT can be anything that is big enough to contain some – mostly wireless – transceiver and have its own unique method of identification (e.g. an IP address). It could be as small as a watch or as big as an entire city: eyeglasses, household goods or traffic lights. Even insects, farm animals or humans can be equipped with some sensors and transmitters, which look after them and monitor their location or health. It’s important to mention that unlike the Internet, where people exchange information, Internet of Things is all about the communication between devices. It is not the people that are gathering data and communicating with each other, but rather machines.

Objects within IoT don’t have to use the Internet for communication, they can use specialized local networks. Communication in IoT – for practical reasons – is usually wireless and takes place within a close range (up to 50 m). Bluetooth Smart modules, which are small and require very little energy, seem to fit in perfectly. Some solutions can also use cellular network for long range communication. While the number of devices grows, so does the network traffic, which can lead to bottlenecks at communication hubs. One of the solutions could be the use of mesh network. In contrast to the centralized ones, where all devices are connected to a central server or a hub, mesh network uses all its devices as a kind of backbone network to send data. Moreover, devices within IoT don’t have to be online all the time. They can store all the collected data and send it later, at the most convenient moment.

There is no universal recipe for IoT, because it is not a thing, but rather a design pattern, which can be applied to many domains and tuned to serve a specific purpose. What is important is the fact that the designed solution incorporates the basic elements of an IoT stack: 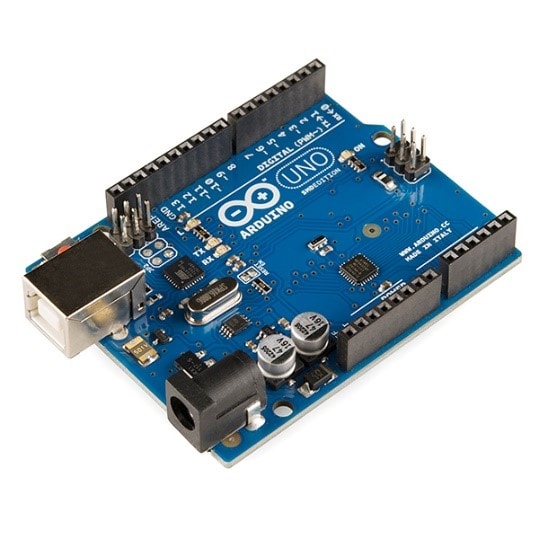 Example of a microcontroller, which could be a ‚thing’ in IoT (Arduino Uno)

IoT connects individual devices into autonomous networks, where services collect and analyze data gathered from connected machines and use it to manage and/or initiate actions of those, or other devices. Those services can be deployed on a separate device, microcontroller, local server or in the cloud.

Internet of Things is, well, all about connecting things, a lot of them. What happens when we try to connect everything with everything? Lots of data, that is for sure. All sensors embedded within devices such as cars, houses or health monitors gather tons of information about their work and interactions with the environment. All of that data can be analyzed and shared – e.g. over the Internet – with other devices, in order to perform their tasks better. That’s the essence of IoT: Massive amount of automated services that share data in order to „learn” from each other and improve their performance with almost zero human input.

At first glance, IoT doesn’t represent anything special. We already have devices with embedded sensors, which send data to servers for further processing. The point is connecting large amount of devices. They’re about to create an ecosystem of sorts, a hive or – something we could loosely call – a „smart environment”, where they can tune themselves to work efficiently without human intervention. Like a self-correcting system, which becomes smarter with each new data input. In IoT, all of the devices transcend into something more than just the sum of the parts. By working together they know more than each of them separately. When you take data from one device and add it to that of another, you may find out that one plus one equals more than two. It means that a network of devices while processing the gathered data, can arrive at unique conclusions and perform actions on new or existing devices accordingly.

Is it worth holding our breath for IoT? Cisco says that the Internet of Things installed base will grow up to 50 billion units by 2020 1, while Intel says that number will reach 200 billion2. Taking the exact numbers aside, those devices will have a great impact on our lives.

For some people, the Internet of Things might just be a marketing term used to stimulate sales. It is worth remembering that everything that makes IoT has been known for a long time now. Just recently we’ve started to think about it as a separate network of things that – thanks to automation – can help us save our time by freeing us from the burden of routine and boring activities and allow us to use that time more productively or just relax.

The main questions addressed in the first part of the article are whether the task of ...