From time to time there is a need for hard(time or resource consuming) tasks that should be done in a web site background (like creating thumbnails, generating reports etc.). It is often important that this data processing doesn’t have impact on the web site performance. There is some truth in opinion that running background threads and asynchronous operations on Microsoft IIS is possible, but how it works underneath and how to do it right, is not always that obvious. The above might be a strong reason why Web Jobs mechanism, introduced lately to Azure platform, will find recognition among web developers

The convenient way of hosting websites on Azure is to host them as a PaaS (Platform as a Service) way. Then, there is no need to worry about details of virtual machines or application managements and OS updates as ‘someone’ is taking care of that for us. Current Azure compute instances can be divided into three main categories:

The first two are supplied with VHD (Virtual Hard Drives) and host VM that is invisible for programmer (well, there is a way to access them via RDP, but the idea is that you should not need to do that). Interaction with those roles is mainly programmatically (deployment from Visual Studio, PowerShell scripts etc.). So basically, they can be labelled as IaaS (Infrastructure as a Service). It is not a very easy task to configure them to run some scheduled or triggered jobs. This gap is now filled with Web Jobs idea.

Basically, Web Job is a background process that runs on the same virtual machine instance as the web site, for which the Web Job is ‘working’ . It is kind of a lightweight Worker Role associated with web site. Process life cycle is strictly connected with web sites, so restarting a web site will cause a Web Job restart. They will also scale together with the owner web site. That clearly implicates that not every kind of job is a good candidate to become a Web Job. Exemplary tasks that seem to be a perfect match for this new idea are as follows:

As Web Job we can run applications or script written in many popular languages/technologies: 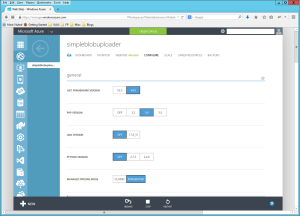 Azure stores each Web Job in separate folder under path matching a pattern: \wwwroot\App_Data\\. When Azure is asked to run a Web Job it first looks for a file with name matching ‘run.’, if file is not found it looks for the first file with one of the supported extensions. If the second lookup fails, Azure reports error that it was not a valid Web Job.

Each Web job can be configured to run in one of the following modes:
1. Continuous – runs all the time, analogy to Windows Service configured with auto start option is in place. Hosting environment monitors the job status and brings it up when process is down. (NOTE: With the current preview, this works properly on standard web sites with ‘always on’ setting. Caution is required when we scale the site up from Standard mode – Web Jobs will be terminated when there is no request for 20 minutes)
2. Scheduled – runs at particular times.
3. On Demand – runs when started manually.

Examples are really simple. Just to demonstrate the idea behind Web Jobs I’ll show tree cases. The first two of them demonstrate how to use normal console application written in .Net or Java to run them as a Web Job. The last example shows how to create solution to a more specific task. 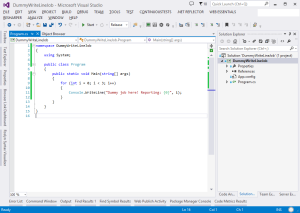 3. To manually deploy our application as new Web Job – we need to create a zip file that contains our project output (in our case standalone exe file is enough). It is important to remember that the main executable file needs to be on the root level of that zip file. Name of the file is irrelevant. The current limit size for one zip file is 100 MB. 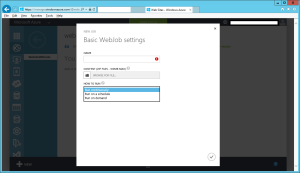 I want to run this one every 5 minutes: 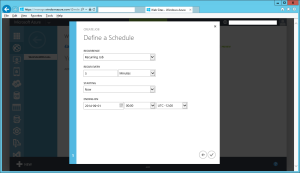 7. Now, our job is up and running. To verify it, we can check log file produced by Web Job (link in Logs columns) – this file contains diagnostic information about run and application output that was redirected automatically to that file (the same goes for error stream, so if, by any chance, program throws exception that is unhandled it will also be logged in that file and job run status will be set as Failed) 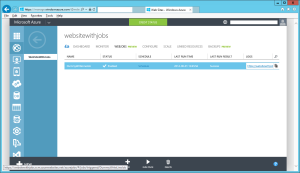 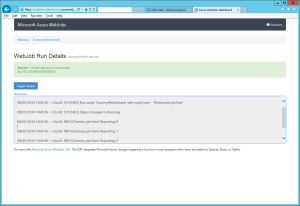 To prove that not only .Net application will run here – the next example presents Java code (first, we need to ensure that Java is enabled for our web site – as shown in the Pic. 1). In order to do this, we need to: 1. Create a simple Java application, for example:

2. Compile it to *.jar 3. Create run.bat file (or another script file that is able to invoke commands), with a single command: %JAVA_HOME%\bin\java DummyJavaTest 4. Create a zip file with those two files and upload it (as in the previous example) 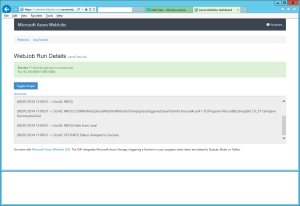 Now, more real-life example of how we can use Web Jobs to be triggered when new content is uploaded to website. Let’s say we are developing new web site, hosted on Azure. On that web site users can file issues and attach pictures. Then, we are asked to create a PDF report for every issue, and it is a critical functionality that has to be delivered ASAP☺. We know that there is an old library for that, but it might be risky to use it inside web application, as it wasn’t tested in that scenario at all. Workflow might be as follows: when uploaded picture is stored in Azure Blob Storage – notification is sent using Azure Queue mechanism. Our Web Job listens to those notifications and when receives one, loads related picture and creates a new PDF report with the mentioned library. Blob and Containers look as follows: 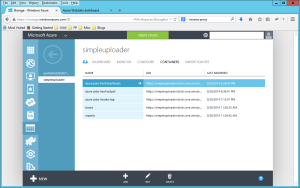 Containers that have name starting with ‘azure-‘are created by Azure, for storing logs and diagnostic data about Web Jobs executions. Issues container is used for storing pictures related to issues whereas ‘reports’ container is used for storing generated reports. I’ll skip web site code here – it is a simple ASP .NET MVC5 application, which main purpose is to handle pictures upload and cooperate with Blobs and Queues.(NOTE: Azure Blob Storage is not in scope of this post, but if you are interested have a look at introduction on http://azure.microsoft.com/en-us/documentation/articles/storage-dotnet-how-to-use-blobs/ ) When web site’s backend stores picture in Issues blob it sends notification to Issues queue. Message is a valid .Net class that can serialize / de-serialize to / from JSON (using Newtonsoft.Json library). Web Job will be created as a simple console application that is using the PDF library. Firstly, we need to add NuGet package called Microsoft.WindowsAzure.Jobs. Secondly, to create a Web Job that is able to get the notification messages, we have to configure connection string to Azure Blob storages. So in app.config file we need to add connectionStrings section:

Interesting points: JobHost is a class that actually do the ‘infrastructure’ related tasks. It reads the bindings used in method signatures, listens for triggers and then invokes proper methods. ProcessIncomingIssue – this method is a handler for received notification from queue associated with Issues Blob Storage. Interesting part here are the parameter attributes. BlobAttribute ask Blob Storage for a Blob item. Item is picked by argument’s constructor parameter based on simple pattern matching. The first part matches container name, and tokens in {} matches property of de-serialized message object. We can also bind input and/or output streams to Cloud Table using TableAttribute or to Queue using QueueAttribute. QueryTriggerAttribute binds parameter to a queue with name given as constructor parameter and waits for notifications sent to that queue. Alternatively, we can use BlobTriggerAttribute, which waits for Blob updates, but in that case we would have to store Issue metadata together with the Blob. So the flow of the method is very simple: read picture from Issues container, create a PDF report, write it to the output stream.

Most programmers are not very happy when they have to do manual deployments. So to make it easier and in more automatic way we have quite a few options: 1. In Visual Studio, we can take advantage of the folder structure of a web site, and place our Web Jobs under /App_Data/jobs///. Then it will be deployed to Azure together with our web site. 2. The second option is to use tools that are delivered together with Azure SDK (http://www.microsoft.com/en-us/download/details.aspx?id=40893). They integrate with Visual Studio nicely. Then, we have an option called ‘Deploy as Web Job’ available in projects context menu (It has some problems with projects that are inside solution folders). 3. If we are creating a new Web Site on Azure, we can select ‘Publish from Source Control’ option. In that case we can select source control system we want to use for that purpose. Git, GitHub, BitBucket, CodePlex, DropBox, Visual Studio Online are currently available systems. From now on there is a new tab called Deployment on Web Site page, on which we see URL of related repository, deployments history etc. For example, we can select local Git repository as our source – we are provided with Git repository URL, to which we can do a git push command. (Local Git repository should be created in applications root folder. Azure will take care of .Net code compilation.) 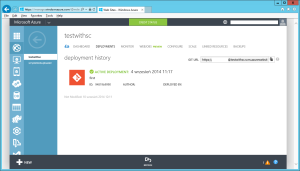 That’s a true story. This conversation between me and a new member of my team happened ...