Following the rule of limited trust, it not only changes a general approach to everyday life but also forces different branches of business to undertake additional actions and introduce procedures to ensure that the particular subject matter is well-defined and not modified without the knowledge of the other party.

It affects, in particular, the cases where a reasonable suspicion or doubt about the delivered data correctness occurs, which is the matter of exchange. Among such examples are downloaded files, sent document agreements, or regulations.

WHO IS AFFECTED (POLISH SCENE)

In Poland, the Consumer Rights Act, which came into force on the 25th of December 2014, imposes the information obligation on entrepreneurs in contracts concluded remotely or outside the company’s premises. The Act identifies various ways of passing important information to the consumer (understood as communication). Such information can be written on paper (or any other durable medium) or forwarded in a way corresponding to the type of applied communication means. This law also introduces a new definition, which is a “durable medium”. Simply put, it is any substance or tool allowing a consumer or an entrepreneur to store information dedicated and addressed strictly to them, and which can be accessed in the future as long as it is needed (timespan provided by law) in an unmodified form. In practice, we can consider the following things as durable media:

But also services, such as:

Some time ago, a solution based on the blockchain technology was introduced, deployed and implemented as a customer service by PKO BP. It turned out that their unique approach is based on the blockchain technology, where nodes are represented by the bank itself and the KIR (National Clearing House). Such software solution has many merits stemming from the applied technology, but we can also assume that it could help to reduce the costs of printing documents on paper or burning CD/DVDs including the costs of a production process, implementation, and maintenance. A similar approach is planned by Alior Bank. These aren’t the only examples embracing the problem of storing files and making sure that they remain unchanged, but they indicate possible challenges which may arise for entrepreneurs, institutions, parties, state offices, or even governments. Below, there is a list of different domains which may require some sort of support in case of the authorized files:

Before you jump in at the deep end and dive into the possibilities of blockchain, it is good to think things through. Applying blockchain technology guarantees immutability of the saved data, however it also has its flaws which one should carefully consider against business needs. Once we take the blockchain as a durable medium into consideration, we should be aware that the best approach is to store only the basic information, not the files themselves. This information could be understood as names, timestamps, extensions, authors, or any other properties which are stored by a file system and help identify the file among others. Here we come to the point made before that the best way to distinguish the file (not only from other files but also from versions of the same file) is knowing its hash. It’s another level of security which hides the content of the file behind a fixed size sequence of letters and digits. Any modification of the file, regardless of intentions, meaning, or size, causes a complete change of its hash, which gives a proof that there is (or isn’t) a consistency between the requested file and the file stored. This proof is an argument supporting the case.

Having answered what we should store in the blockchain, another question arises – where should we keep these files in practice? As decentralization gains popularity, it is tempting to use one of the distributed file systems. They are designed to consolidate information and facilitate file sharing while providing remote access at a local-like level. The main characteristics of such systems are high availability, reliability, data integrity, scalability, and heterogeneity (distributed system looks the same for every device which can also be a part of the system). An example of a distributed file system that has been functioning for some time is the InterPlanetary File System known as IPFS. It synthesizes successful ideas from previous peer-to-peer systems, including BitTorrent or Git. It also provides a high throughput content-addressed block storage model, with content address hyperlinks. Its structure, built upon DAG (Directed Acyclic Graph), lets us create a versioned file system, or even a permanent web. IPFS consists of hashing tables, incentivized blocks exchange, and self-certified file system.

As each of the system components, it also has some demerits or aspects requiring some additional consideration, i.e. need for additional data backup or the way of securing the file replication in the network. The second issue is especially worth considering because IPFS itself doesn’t have any automatic replications. Nodes only store and/or distribute content they are explicitly intended to store and/or distribute. Simply put, devices that run IPFS nodes don’t have to host files that they are not designed for. But when it comes to the first issue, nodes can refer to the requested file and from now on have its local copy. For more details and explanations, please visit IPFS homepage and read their whitepaper.

After this introduction, we can go straight to the technical details of the solution which is expected to solve described problems using the technologies mentioned.

This section describes a simple implementation of storing file hash (SHA-256) in the private blockchain built upon ETH protocol keeping the file in a distributed file system – IPFS.

Disclaimer: the instruction is based on Windows OS, some of the instructions may require OS specific approach such as using sudo in Linux-based OSes.

Keep the terminal window open. Notice that all peer nodes are removed for the purpose of this PoC (ipfs bootstram rm --all). In a real world scenario, where a complete configuration is required, it would be better to add additional nodes to the IPFS network (different machines) using the command: ipfs bootstrap add /ip4/<node_ip>/tcp/4001/ipfs/<node_hash>

DETAILED DESCRIPTION OF THE MAJOR ELEMENTS

The system consists of three main elements – a client application, a private ETH network and an IPFS node. The client application communicates with ETH and IPFS via HTTP requests. When the application is run locally, there is also an IPFS web UI available under 127.0.0.1:5001/webui, which can be used to configure the node and add/browse the files directly. A graphic representation of the application structure can be seen on Fig. 1.

The application consists of a single screen, divided into three main sections, as shown on Fig. 2. 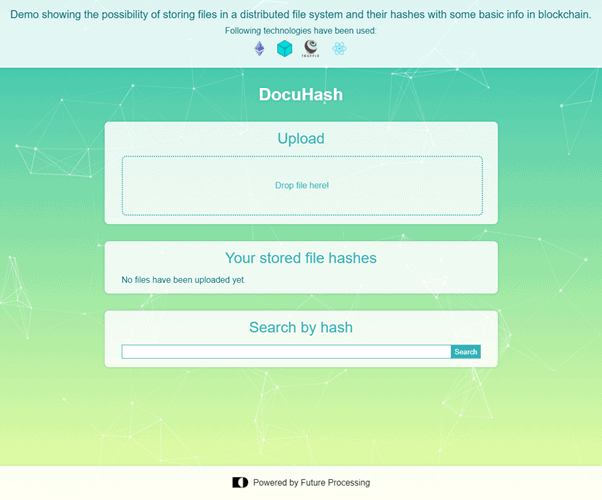 This section contains a drop zone, which allows users to drag and drop files which they wish to upload. It is also possible to open a file picker dialog window by clicking the area marked by the dotted line. Once a file is dropped or chosen in the dialog window, an upload operation will initialize, which will be indicated by a spinner appearing at the top of the screen. Once the upload is finished, a new file hash will appear in the section below.
There may be a case where a given file already exists in the system (e.g. its copy may have been uploaded by someone else). In such case an appropriate browser alert will appear as shown on Fig. 3. The file hash will then appear in the stored file hashes section.

Fig. 3. Alert informing that a file already exists in the system.

This section contains a list of uploaded file hashes. If no files are uploaded, the section will display text “No files have been uploaded yet”, as shown on Fig. 2. Right after a new file gets uploaded, the new hash on the list will get highlighted in yellow for a brief moment, which is represented on Fig. 4.
Right after starting the application, a synchronization step gets performed, checking whether or not the file hashes stored in the browser memory have corresponding entries on the blockchain (differences may occur e.g. after deploying a new version of the system). While this operation is in progress, the section displays text “Syncing files, please wait…” as shown on Fig. 5.

Fig. 4. List of stored file hashes, with the last one having just been uploaded.

This section allows for searching files identified by a hash. A common use case is to copy a chosen hash listed in the stored file hashes section, paste it into the text input and click the “Search” button. This will initiate calls to both ETH network and IPFS and as a result will return file’s metadata fetched from the blockchain. This metadata will get rendered under the search input. Additionally, two buttons will appear – “Browse the file” allowing for viewing the file in a new browser tab (provided that the file can be viewed – image, pdf etc.) and “Download the file” which allows to download the file to the hard drive. Example view of the section after a file had been searched is shown on Fig. 6. 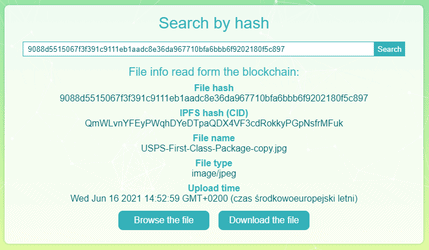 The proposed solution is not a comprehensive example. In order to deepen the issue, we should consider adding more nodes to a distributed file system, migrating the application to the public network, encrypting the file before sending and, finally, we should try to evaluate trust towards the server and decide who should pay the network fees. There is probably much more than that, but it is some food for thought. This article shows some possibilities and strengths of applying a blockchain technology to the described problem. If you have any questions or want to expand this solution, feel free to contact us or leave a comment. The code is available on GitHub. You can also take a look at a live demo. 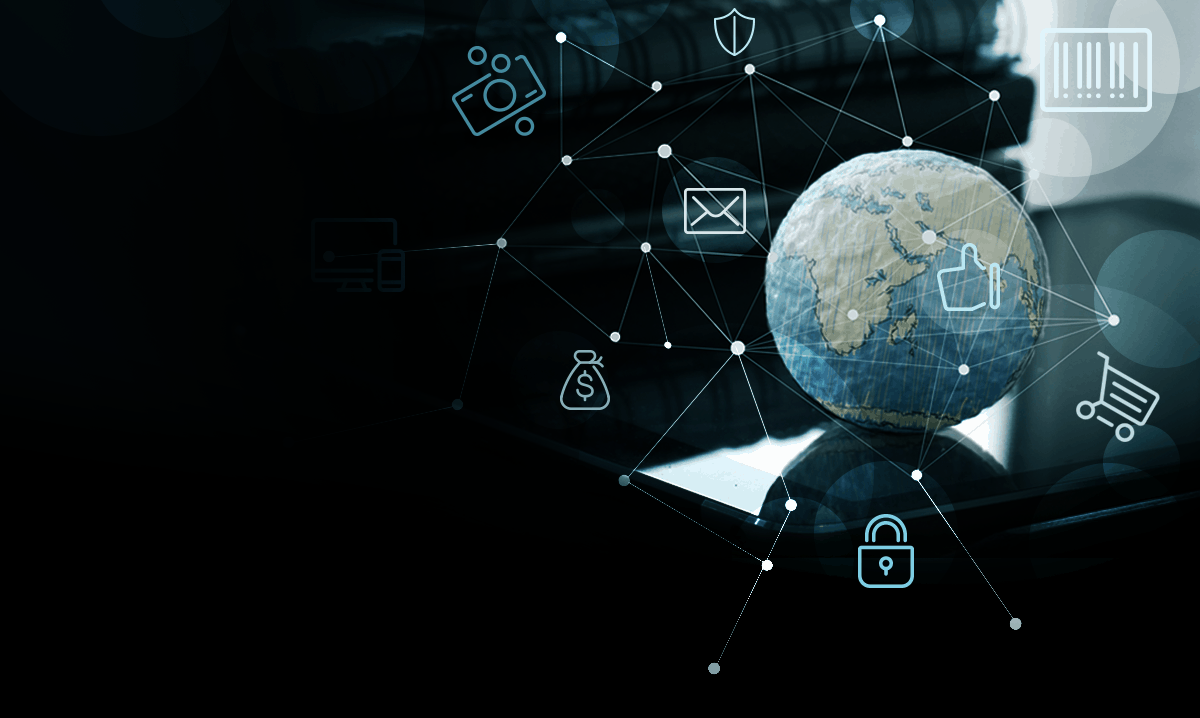 The truth can be measured. Is it a myth, or is blockchain performance really that bad?

Following the rule of limited trust not only changes a general approach to everyday life but ...

The truth can be measured. Is it a myth, or is blockchain performance really that bad?

For all widely known technologies, there are some myths that usually come from a misunderstanding of ...